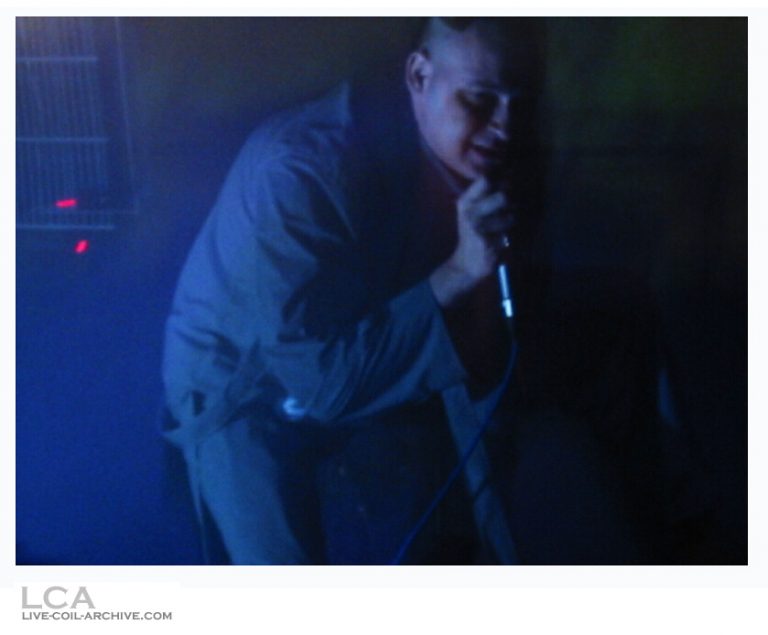 Contreras remembers: “We were friends[.] I met Geoff and Sleazy through Rose McDowall, as I played in her band in the late 90’s when I lived in London…[Leipzig] was the first time [C]oil had nude people covered in blood on stage. It was Pierce and myself, and we each held giant bouquets of flowers when we walked out on stage towards the end of the show, when the strobe lights were going…I remember Geoff’s instructions for us when we came out on stage was to shake and jerk like electrified newborns, or something along those lines. At one point he took my bouquet and starting smashing it and throwing parts of it out into the audience…I’m sure he put the instructions in much more poetic, esoteric terms, knowing Geoff, but that was the general feeling. He and Sleazy are sorely missed!”

John Contreras never performed live with Coil again, but he did see most, if not all their London shows and collaborated with John and Rose on the Rosa Mundi track “The Snow Man” (his cello treated to sound more like a trumpet).

Markus Biener contests 2nd Gen (Wajid Yaseen) and Sorrow supported Coil: “2nd Gen and Sorrow didn‘t support Coil at this evening. They both played at the same festival, but surely in other venues (as I attended both concerts too). 2nd Gen played at Werk 2 and Rose played at Völkerschlachtdenkmal…don’t remember the exact dates, but surely they didn‘t support Coil. The band before them was Deine Lakaien (if I‘m not mistaken). And Coil was the main event at Agra Halle. But many of the Gothics in attendance were quite shocked and left in a hurry…quite funny to watch.”

A German announcer introduces Coil. Translated to English, he says something like: “Finally, it is time. You all waited a long time in front of the stage, and so many…Simply enjoy what’s happening on stage right now. Exclusively tonight…Coil.”

Peter cuts the backing audio track short at the end of the song.

John: “This next song is called ‘Blood from the Air,’ from an album called Horse Rotorvator, from a long, long time ago.”

He skips the “His wandering mind” lyric:

John: “This next song’s dedicated to Rose and Robert and to my friend in Thailand Mr. Bee. ‘Constant Shallowness Leads to Evil.’” Rose is Rose McDowall and Robert was her then-husband Robert Lee. His band Sorrow, with Rose McDowall as a special guest, had played right before Coil at the festival.

At some point, Pierce and Contreras stepped onstage holding bouquets. At some point, they threw them onto the floor and began spasming, as if being electrocuted.

John (after the song): “This was moon musick, this was magickal music. Thank you.”

Thighpaulsandra continued with an apparently impromptu synth jam after the rest of the band left the stage, perhaps to finish the concert at over 60 minutes, as opposed to the era’s usual 55 minutes. It resembles “Beige, “Lowest Common Abominator,” and “Freebase Chakra” off of Constant Shallowness Leads to Evil.

Announcement(s) Made After This Gig

This link shows a email chain/forum thread where the following concert was announced on July 16, 2001. The first post is as follows:

The Organizers of Convergence 7 are proud to announce that
Coil will be one of the distinguished bands performing for
you this August.

Dark, chaotic, perverse, and innovative – Coil has been
around since the early 1980’s and has restlessly pioneered
all manner of electronic and esoteric music through the
years. Their performance for Convergence 7 will surely be
unlike anything most attendees have ever experienced; this
will be their first-ever performance in North America.

Founded by Peter Christopherson of Throbbing Gristle and
John Balance (both Psychic TV alumni), Coil is the distilled
elixir of everything which is taboo and mind-bending. Wildly
eclectic with regards to musical elements, their music is the
soundtrack to dreams of blood, secret gods, mad inventions,
forbidden lusts, cosmic rituals, alchemical delerium, and
magicks unearthed.

Please check out some of the amazing sounds of Coil on our
website: http://www.convergence7.com/coil.html

It’s getting close, and the excitement is overwhelming!

Believe it or not, there’s some debate in the thread over whether Coil was appropriate for the festival. LCA will not include it here. 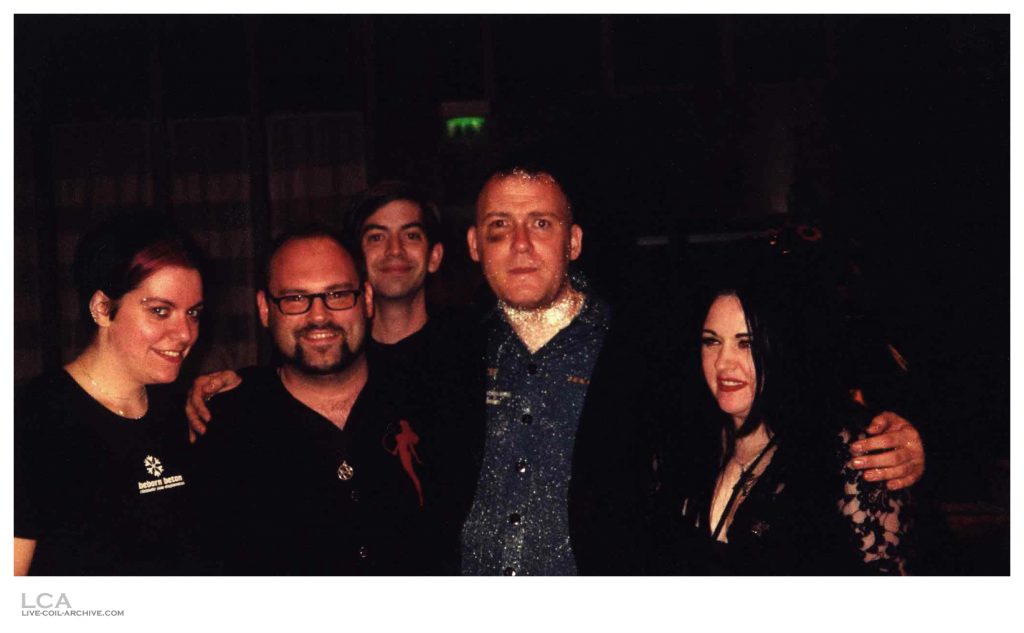 If you have stub from this event, please contact us on: info@live-coil-archive.com

Crazy Clip TV’s “Impressions” – A Brief Overview of the Festival

This video consists mostly of interviews with concert attendees, as well as brief clips of performers. LCA reached out to Crazy Clip TV to see if they recorded any of Coil’s set, but unfortunately, they did not.

The following is a review of the show translated from French-to-English by Google Translate (original found here):

Time to recover, to meet, to organize, and we are on our way to Agra, a monstrous exhibition hangar, with the biggest stage and the most kitsch public of all the festival, real fair Of the appearance, carnival of the Gothic … and this is where Coil will occur , right after Front 242 ?!? What was hard to imagine is quite achievable, Coil proving to more than ten thousand people (five miles will leave the room after the second title … imagine the Germans fleeing the Russian advance in Pomerania during 1945 …) that they are still one of the most avant-garde bands in the world !!! A spectacular show, An industrial and electro-acoustic music where the sounds of a giant xylophone with microphones that will make each note more psychedelic one with the others, with over the voice of madman John Balance, the members of the group – four – dressed in straitjacket of an immaculate white. On a quasi-organic end, Coil will leave the stage with the final sentence: ” This is Nu-Music – This is Magickal Music! “. YES, I HAVE SEEN COIL !!! There are no words to express the sensations produced by this concert, I can only advise you to see them if you have the opportunity!

A small index of pictures can be found here. The photographer recalls: “In 2001, I went to the German festival Wave-Gothic-Treffen and saw Coil. I had a new 1.2 megapixel point and shoot camera which was state of the art at the time. It was dark so I took a few flash photos and as I could check the photos right after taking them, realized that the band was wearing relfective suits that did weird things in the flash. I switched to existing light photography and felt sorry for all the photographers in front of me shooting roll after roll of flash photography.”

More non-English reviews of this concert include:

Markus Biener attended this gig and remembers: “I attended 3 gigs (2x Leipzig, 1x Glauchau). In fact Sorrow didn’t open for Coil at the Agra-Halle in 2001. They played another venue, I’m not even sure if it was on another day. Probably they played the Völkerschlachtdenkmal. Before Coil one of those gruesome Gothic-Acts from Germany were on stage, maybe Deine Lakaien. But there also was a gap from around 45 Min to 60 Min. I remember that, because it was interesting to see, how fast many of the Gothics left the venue as soon as Coil went ont stage. Definetely not a sound they enjoyed. ;-)”