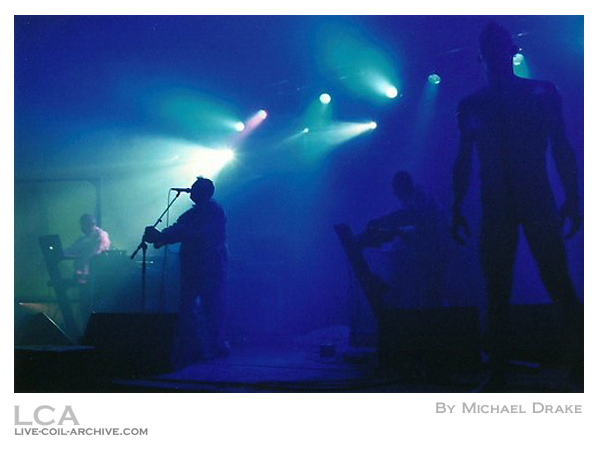 2002-04-02 Vooruit, Ghent, Belgium AUD #2 is mislabeled as a recording of this show on archive.org. Until October 8, 2016, no audio or video of Dour was publicly available, when finally, Pierce Wyss and Massimo Villani, in conjunction with Claus Laufenburg, posted a video to YouTube.

Danny McKernan bought psychedelic mushrooms for the whole band before the gig and all of them were tripping by the time they stepped onstage. He recorded AMT #1 using Massimo’s camera and remembers: “i was on stage at the DOUR, Belgium, show as well but only to film it… not part of the performance i had shot it on BSP’s camera and they kept the tape :(…i met BSP at coil’s house in weston supermare when i was there being photographed by sleazy for thighpaulsandra’s double vulgar album artwork and then later visited them in zurich and they asked me to edit the photos that sleazy had taken of the PST performance with jhonn and to do some videos for them (Das Gegenteil and Veneration X).”

As of May 2022, AMT#1 remains the only publicly available recording. Based on what we can see in it, apparently Coil only brought one video projector with them to this show, as they do not project any video onto the band members. Instead, there’s one projection screen stage left behind Peter and Massimo. The backing projection during “Anarcadia: All Horned Animals” resembles oscillating waves, like a mix between the projections for “What Kind of Animal Are You?” and “I Am Angie Bowie (Sine Waves)” which I do not recognize. The “Amethyst Deceivers” video projection briefly plays at the beginning of the song, then it stops and there is no more video for the show. There are also no distorted mirrors onstage, just fog machines. Consequently, the stage has a dark, dismal look for much of the performance until the lighting person turns on red and white overhead lights during “A.Y.O.R.” and “Backwards.”

In terms of group behavior while onstage, the shrooms made John quite aggressive, as he screamed a lot, improvised new lyrics for every song, and bandied about the stage with reckless abandon. Peter kept periodically glancing back at Danny as he filmed the show and smiled at him. Pierce and Massimo’s choreography unfortunately backpedaled from the Den Haag performance, becoming much more statuesque and boring.

It is unclear if Coil broke most of their usual conventions due to technical difficulties, or if they were all just too high to care, but the result is a rather unique performance.

This version is significantly extended from the original, just like it was at the Den Haag show. While John compensated for the lack of Mike’s bombarde by yelping into the microphone at that gig, here, he starts singing even before discarding his shawl.

For this and the next song, Massimo and Pierce stand motionless, stoically gazing out into the crowd.

He’s in the trees, he’s coming [repeated]
The woods are alive with the smell of his coming

The “vision of a burning bush” line would soon be used prominently in some performances of “An Unearthly Red.” The “underwater” imagery is a possible reference to “Summer Substructures,” off of Summer Solstice (1998). Because of the lack of “Sometimes, I hate myself” line, I will not tag “The Gimp/Sometimes” to the song in this listing.

This exchange refers to the classic Coil song “Windowpane” from Love’s Secret Domain (1991). Eventually, the band would play three loose versions of it, starting at the Lódz 2002.

My mother said to me [repeated]
She said, “Pay your respects to the vultures…”

The band jams for a few minutes even after Peter brings the backing audio tracks to a close.

John (after the song): “Thank you. I had to shit in the woods earlier, and I wiped my bum on a stinging nettle.”

The intro to the song is truncated. Pierce and Massimo finally start to moving, acting sick and shaking their heads wildly.

I went to the doctor
I saw a blood specialist
He said, “It’s unknowable, John”
They took some more tests
And said it’s in my blood to stay
But the blood line ends here; this blood line is queer [repeated]

The first line mentioned of course refers back to “The Gimp/Sometimes.”

It’s possible Peter was having sound problems with his laptop, explaining the fact John is clearly trying to think of more to say to fill the musical pause. Finally, Peter fades the backing track in.

Massimo and Pierce slowly kneel down and present their asses to the audience. For most of the song, Massimo sways slowly back and forth with his eyes closed. John occasionally interacts with them, even bumping into Massimo at one point, almost knocking him over. He then runs over to Pierce and starts slapping his ass. In contrast, Peter passes Massimo at another point and lightly touches his back. Later, John comes back to Massimo, throws himself onto him, and starts humping him in a rather hilarious and sexual display.

The YouTube upload of AMT #1 cuts out during the climax to “Backwards,” but the unsurfaced master tape is more complete. Still frames originally uploaded to the Black Sun Productions website and rescued from the Wayback Machine reveal that by the end of the song, John, Pierce, and Massimo and jumped offstage to sing and dance right in front of the barrier separating them from the audience.

“Everything fornicates everything” was one of Coil’s many slogans, this one garnering an official t-shirt.

Please get in touch with us if you have any promotional material from this concert: info@live-coil-archive.com

Please note that some of these AMT #1 snapshots are from portions of “Backwards” not currently available for public viewing, i.e. when John and Massimo walk over to the audience. These snapshots were saved from archived sections of Black Sun Productions’ website. The master tape might be lost, so it’s unknown if the rest of the tape will ever be made available…