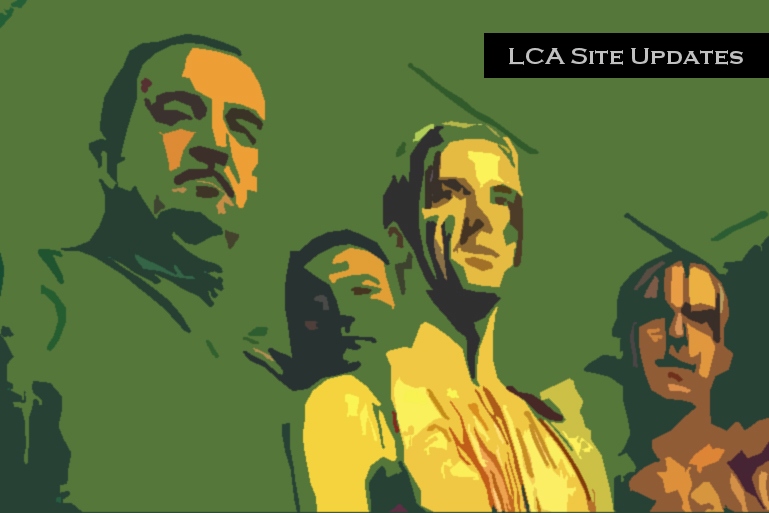 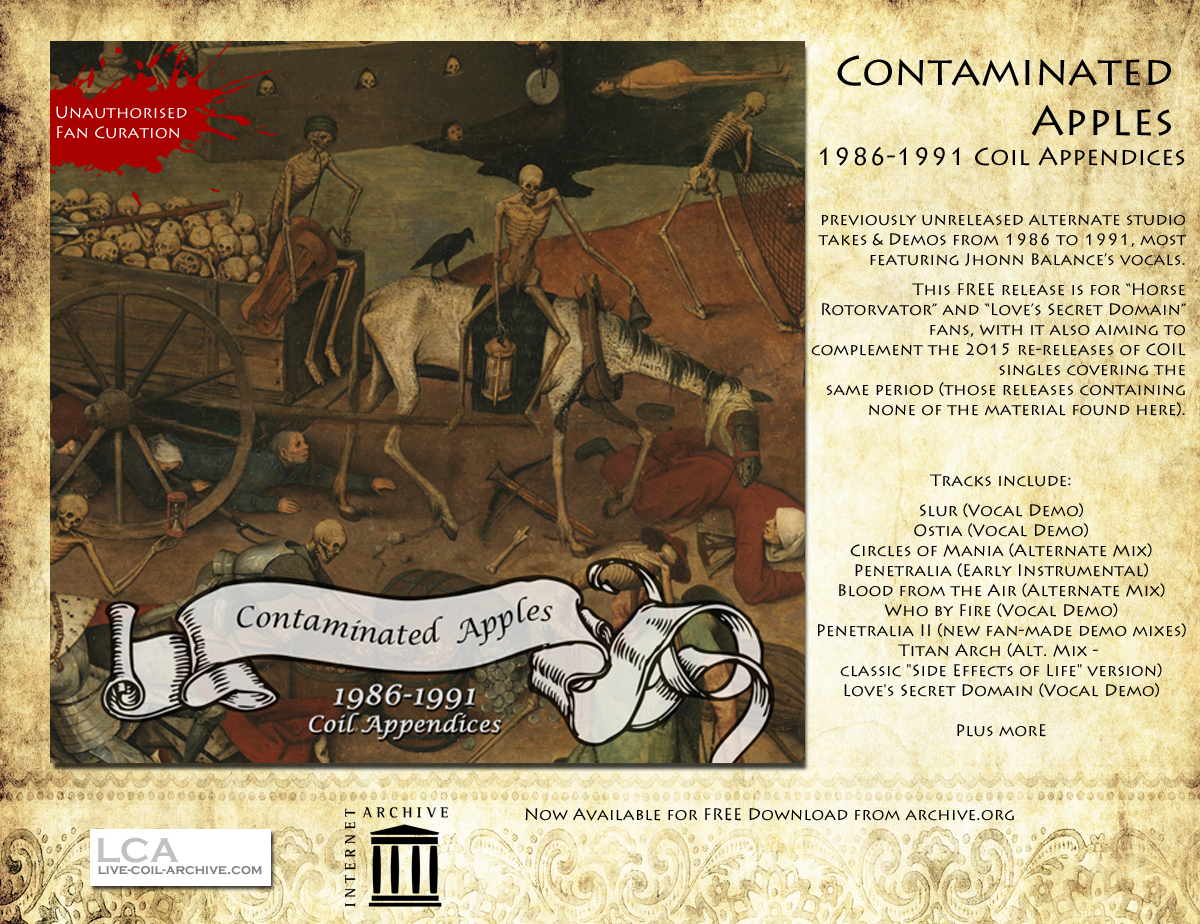 COIL ~ Contaminated Apples: 1986-1991 Appendices
{An Unauthorised Collection}
14 years ago today, John Balance, the lead singer and visionary behind one of the best bands of all time, tragically passed away. Every year, several Coil fans and I like to honor him. 1 year ago today, Phil Barrington, Stefan Beiersmann, and myself decided to launch Live Coil Archive to do just that. It has been an eventful, wonderful year for us and we hope it has been for you too.
Though we specialize in Coil’s live concerts, we have decided to release a new fan studio project on our 1st year anniversary. Perhaps that’s a tad odd, but I suppose it’s just our sense of humor! 🙂
Listening to the earlier Coil albums, John clearly never felt the need to sing a vocal to every single track they wrote. Instrumentals dominate many albums, especially “Stolen and Contaminated Songs” and the mid-90s releases pre-“Backwards.” When the first 8 T-ARCH CDs came out and most tracks included were early instrumental demos, with some exceptions like “Tiny Birds,” “Sodoma Atomicus,” and “Meet Murder My Angel,” that essentially confirmed in my mind that John didn’t record very many vocal demo takes – certainly almost none the band felt like keeping. Pleasantly surprisingly, it turns out this isn’t exactly true.
When a small handful of anonymous donors very kindly gave LCA a collection of unreleased studio demos and outtakes for us to use in creative projects, which over the past year we have made into “Scatology Sessions,” “Hidden Hydrology,” “Wormsongs,” and now “Contaminated Apples,” I spent a great deal of time mulling over and organizing the tracks we were given. I found a couple of alternate vocal versions and mixes among the lot which were mysteriously not included on T-ARCH. Given the abundance of instrumental demo material already out there for the band, especially from Scatology, Horse Rotorvator, and Love’s Secret Domain, I felt obliged to provide this arguably more valuable vocal material to the public ear.
So, I broached the idea of making such a compilation to Phil, and we worked it out. He and I discussed the title of the compilation for some time. The original title was just “1986-1991 Appendices,” then Phil came up with “Stolen Apples” as a reference to William Blake’s “The Poison Tree” poem and the abstract concept of “stealing human heads.” This made me think of the Coil album title “Stolen and Contaminated Songs,” and you can fill in the blanks from there.
The humble aim of this curation is just to make as satisfying and listenable an ‘album-like experience’ documenting the creative processes leading up to the finalization of our favorite Coil studio songs. For as long as I have been a part of the Coil community, it has been made abundantly clear to me that this is the sort of thing most Coil fans want to hear – they feel a greater sense of personal attachment to the band when provided material which humanizes the band. These kinds of tracks show the blood, sweat, and tears John, Peter, Stephen, and everyone else put into making these songs, to providing the listener with as much emotionally resonant music as possible. It is our sincere belief that this creative process makes these tracks worthy for you to enjoy.
Technically, this compilation contains mostly alternate mixes and vocal demos for Horse Rotorvator material, but I also found a couple tracks from the Hellraiser and Love’s Secret Domain-eras that I felt were equally as worthy. The Hellraiser and “Penetralia” tracks are the only instrumental songs, here – everything else has vocals.
Includes a 22-page ‘CD booklet’ pdf written by myself and Phil Barrington, including background information, source notes, track-by-track notes, and transcribed song lyrics.
This collected/curated form is released under Copyleft and Fair Use / Fair Dealing principles as a free/non-profit historical digital document, both for the COIL fanbase and as a relic of English alternative music history, November 13th 2018.
Best Wishes and Good Karma,
Kiefer Gorena x / Live Coil Archive
November 13, 2018
Look out as well for more live material coming in the near future, and cheers to what we hope to be many wonderful years for LCA to come! 😀
Find it here. 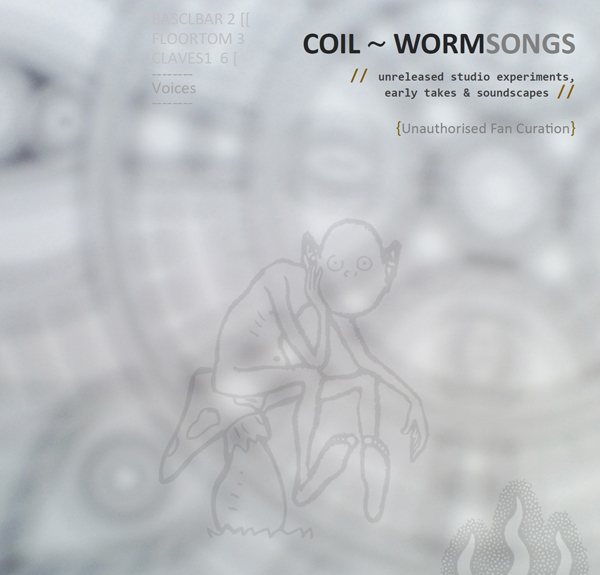 A free collection of mostly previously-unreleased studio tracks, soundscapes and experiments by COIL. I’ve curated this set for the COIL fan who appreciates the band’s more experimental side and who is interested in researching the ELpH period and beyond (accordingly, this is released under Fair Use/Fair Dealing doctrine for research and review purposes as a free fan-sourced collection exclusively on archive.org – see its pdf booklet for more background detail) – available to download now.

The “WORMSONGS” title I’ve personally used for this unauthorised collection is inspired by a line of William Blake’s 1794 poem “The Sick Rose”, a rendition of which is performed by COIL on Track #15.

Previously unreleased COIL tracks on this upload include:-

This free COIL collection is mostly the result of receiving unreleased tracks, often as FLACs, from three very kind anonymous COIL associates/fans in recent times (my thanks to you all, chaps). The only humble aim of my curation is just to make as satisfying and listenable an ‘album-like experience’ of these Sidereal and experimental tracks as possible, picking some studio talk from Jhonn and Sleazy to place amongst them, and choosing a melancholic mood towards the end section of the 15 tracks.

* Several images of posters, adverts, ticket stubs, and gigs added throughout the website, courtesy of Pete Greening and Greg Smith.

* Another concert review added to “Background” section of the Lódz 2002 concert page.

* “Coil Transmitter Stone #3” officially claimed by Chris and Patrick. They have graciously shared AMT for the 2001-03-25 Nantes show. Download it here. 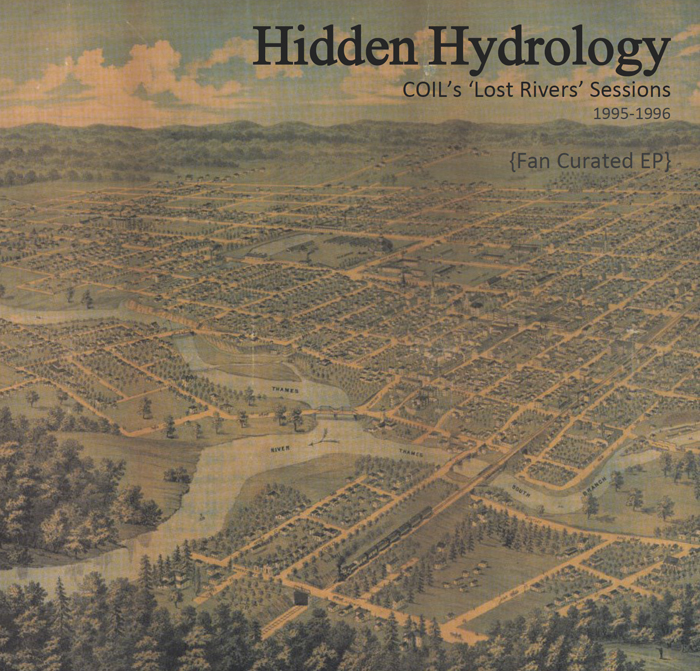 “COIL’s ‘Lost Rivers’ sessions occurred during their London studio time in the winter season of December 1995-February 1996 (for what ultimately became the “A Thousand Lights In A Darkened Room” album). A track from this specific set of recordings appeared on the vinyl-only pressing of that album and another track featured on a psychedelic magazine compilation album. Around this recording time Jhonn Balance received a fax from David Tibet containing evocative passages from the Crackanthorpe ‘Vignettes’ journal from 1896…”

This EP is the result of a Live Coil Archive website admin receiving a few unreleased takes and DAT master files as FLACS from a COIL fan, all taken from these Black Light District/COIL sessions.

* Added “M_” lineage denomination and file type to each recording currently on the site, edited various bits of info attached to many recordings. 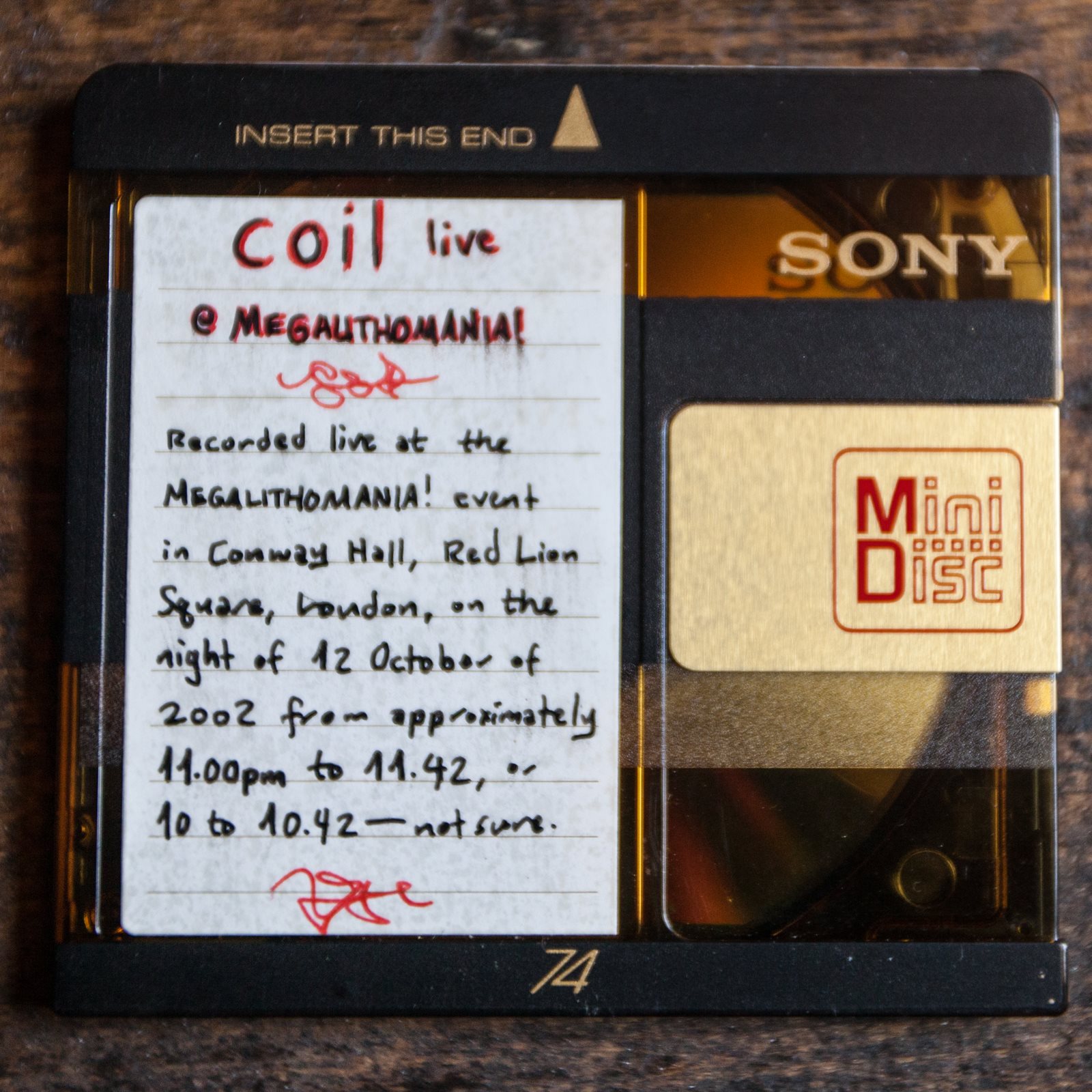 * “Coil Transmitter Stone #2” officially claimed by Don Rubin. He has graciously shared SBD #1b (the full desk recording) for the 2002-04-13 Glauchau show. Download it here. 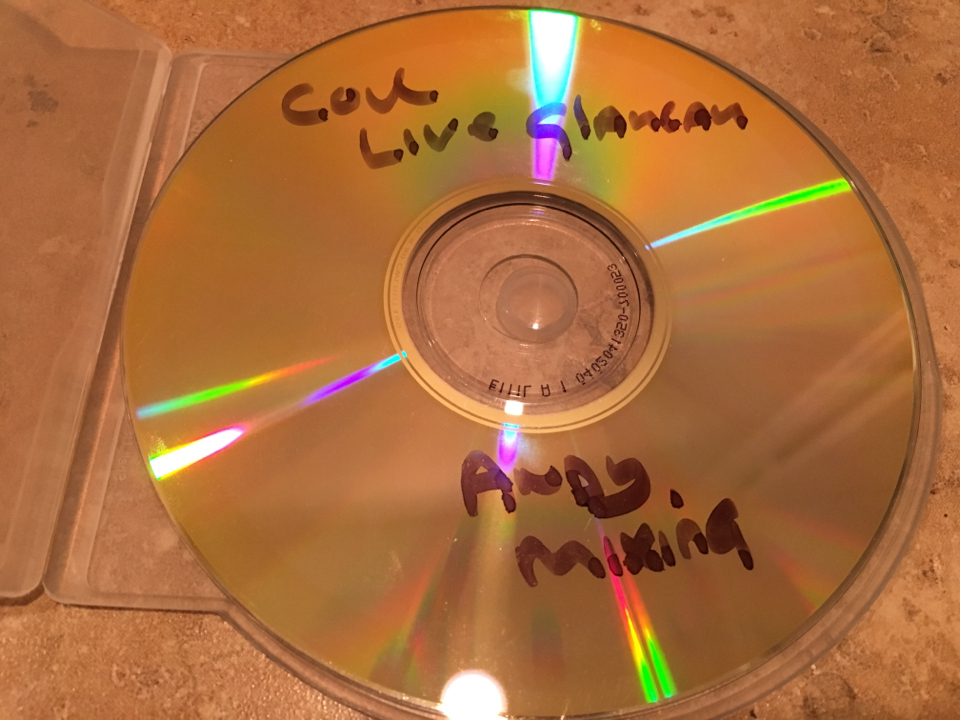 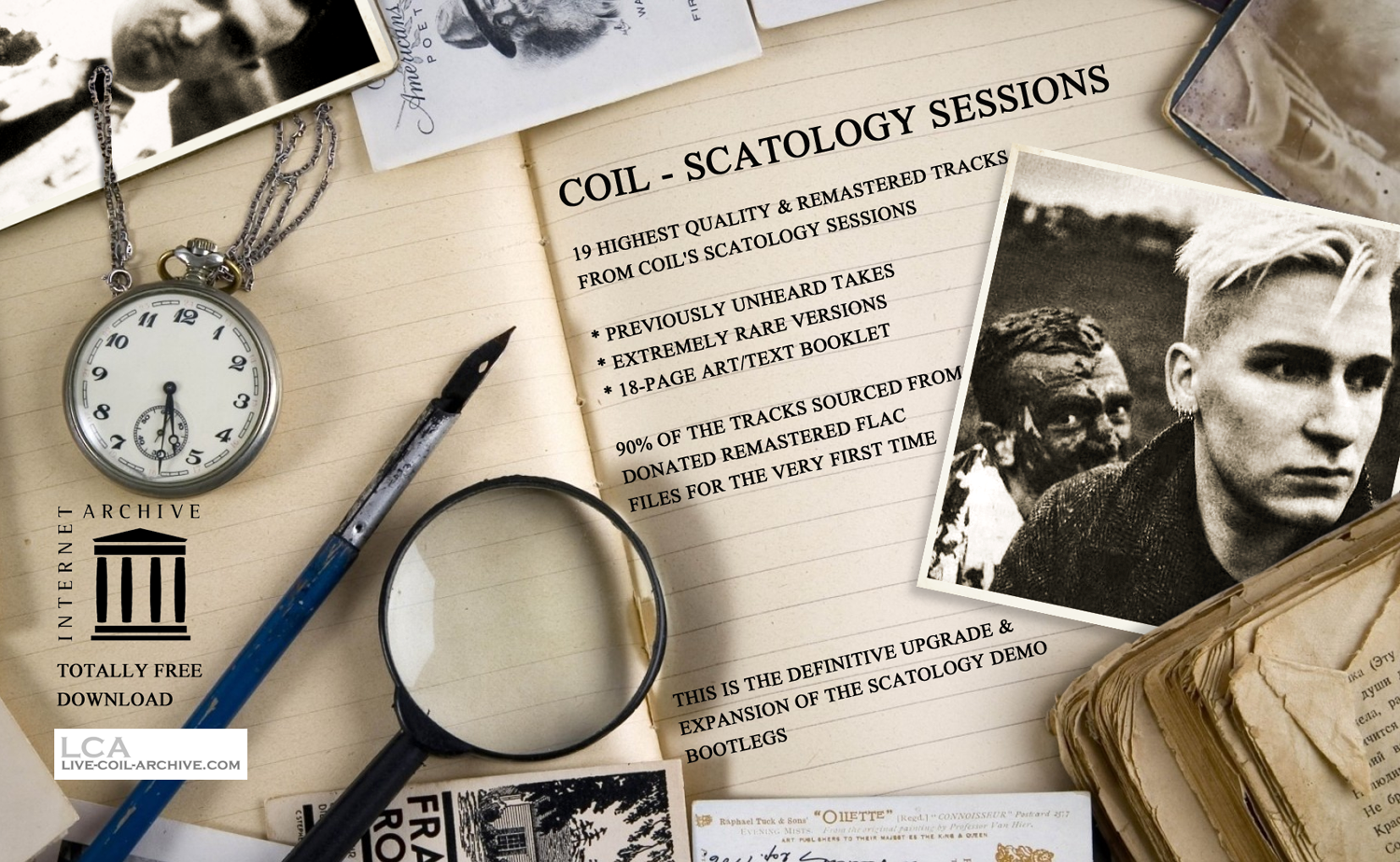 *COIL’S SCATOLOGY SESSIONS
This brand new curated collection features 19 highest quality and remastered tracks from COIL’s legendary Scatology studio sessions.
This collection includes, for the very first time:
* Previously unheard takes.
* Extremely rare versions.
* Highest quality FLAC sources for previously leaked songs.
* 18-Page Art/Text booklet specifically designed by Barrington Arts.
90% of the tracks are sourced from remastered FLAC files for the very first time, donated to the Live Coil Archive in 2017 for creative use by the LCA. The team at LCA sincerely extend our thanks to this anonymous donor.
THIS IS THE TOTALLY FREE DEFINITIVE UPGRADE OF THE SCATOLOGY DEMO BOOTLEGS.
If interested, see more details in the accompanying illustrated pdf booklet. We at LCA hope you enjoy!
Link to the collection here.
PB and KG

* Reorganized “Background” section of every Concert page such that “Attendee Recollections,” “Gig Review(s),” and “Contemporaneous Interview(s)” are now separate sections.

* Bootlegger’s note attached to AUD #1 of the 2002 Limoges concert added to the “Known Recordings” section of the page.

* Another concert review added to “Background” section of the Bologna 2002 concert page.

* “How You Can Help” page updated with “Pictures” section.

* “How You Can Help” page updated with “Source Upgrades” and “Your Matrix Mix Requests” sections.

* Reorganized the “Live Recordings” tables on each page such that the order presented is consistently AUD, SBD, AMT, PRO, and EDIT