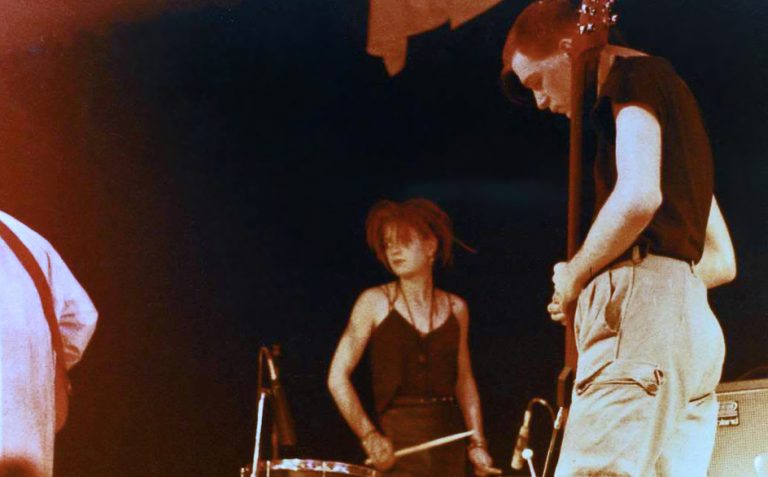 Get it out of here
Get. It. Out.
I want tits out

It’s a secret
You’re a secret

It doesn’t matter, ’cause the zebra’s on fire
In the fire

Your eye… Wolf-eye, I…
I teach you
I hate you
You’re waiting to be my sweetheart
…holds me here waiting…
Power danger violence fear
The power, danger, violence, fear, fear
Pain, and the pain
Hurts when you fuck me…
Hot hard prick rammed down my throat
He only does it for my red-hot womb
I’d give anything to leave now… Intimate

Min ends the song by screaming.

Have to rearrange reality
To come back here
To these monoliths

John Gosling: “We leave you with some truth.” He smirks to the audience.

This song contains hollers from Balance and a lengthy monologue sampled from an interview with notorious hippie cult leader Charles Manson, released in John Moran’s The Manson Family Opera.

And I believe it was truth…

The truth has not been in your courtroom,
Never has been in your courtroom.
All you have is confusion in your courtroom.
Why do I have to stand and take the blame for your sins again?
I’ve spent my life in jail, paying for you, so that you could ride your bicycle, have
your birthday parties, have what you call a life.
You know, I never had a life. I don’t even know what life is, you know: I go to the
desert, I’m not even allowed to live in your desert. I’m no good for anything except
to be used, as your scapegoat.

I’m used. Every day of my life, I’ve been used. When I haven’t been used, and I have
been on the — on the street – I’ve been chased, robbed, harassed, pushed, kicked,
my ribs have been broken.
You know, the same man that gives you a traffic ticket is the same guy that knocks
my brains out.
He figures just because he’s the man (those scum) … nobody’s gonna say anything.

My daddy’s not a congressman, a doctor, or a lawyer.

..Under the door… Sneaking … Sneaking everywhere. Everything is sneaky up
around Sneakyville…
Has to be sneaky, and it’s even a shame to sneak… to make… Such an evil, nasty
thing.
You gotta sneak to get to the truth; the truth is condemned… The truth has been in
your reservation, building your railroads, emptying your garbage. The truth is in
your brains and your jails, and the young lads starting your courts or your congress
where the old sit judgement on the young. They don’t know about the young…

Look at the madness that goes on. You can’t prove anything that happened yesterday. Now is the only thing that’s real. You can try to prove that Columbus sailed on
that ocean, but it’s not the same ocean: it’s a different ocean. It’s a different world.

A friend of mine… He’s afraid of what he might have to do in order to save his
reality, as I saved mine.

You can’t prove anything: there’s nothing to prove. Every man judges himself. He
knows what he is. You know what he was. I know what I am. We all know who we
are. Nobody can stand in judgement – like you’re standing in judgement. of a
human body… But it doesn’t amount to anything.

They’re persecuting themselves every time they go on the freeway.

This was Coil’s fourth and last public performance until the December 1999 eLpH show. Balance and Peter stopped collaborating with Zos Kia and left Psychic TV shortly after this festival, making Coil their priority. They decided to primarily focus on studio albums and film soundtracks, kickstarting the next decade and a half by releasing seminal EP How to Destroy Angels and LP Scatology in 1984.

1984-1999 is well-documented elsewhere, such as on Brainwashed, so we at LCA would feel it redundant to recap everything here. The next page on this site picks back up with the 1999 eLpH show. 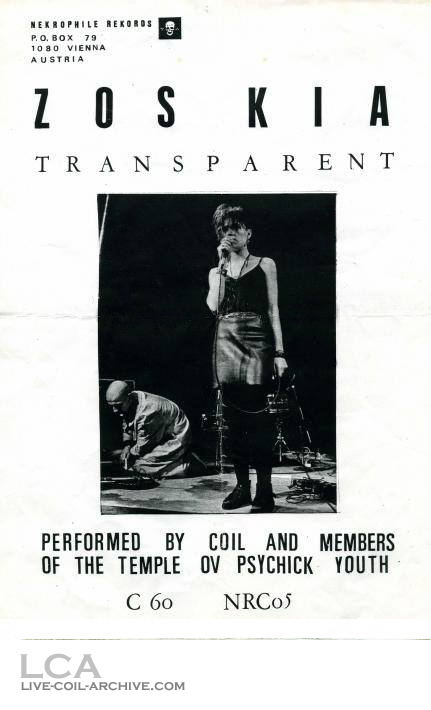 SBD #1a – Officially released on Zos Kia/Coil’s album “Transparent.” Discogs link only for this official release.
SBD #1b – Remaster from the 2016 reissue of “Transparent”. Bandcamp link.
EDIT #1 – 2-camera angles (professional). On YouTube.