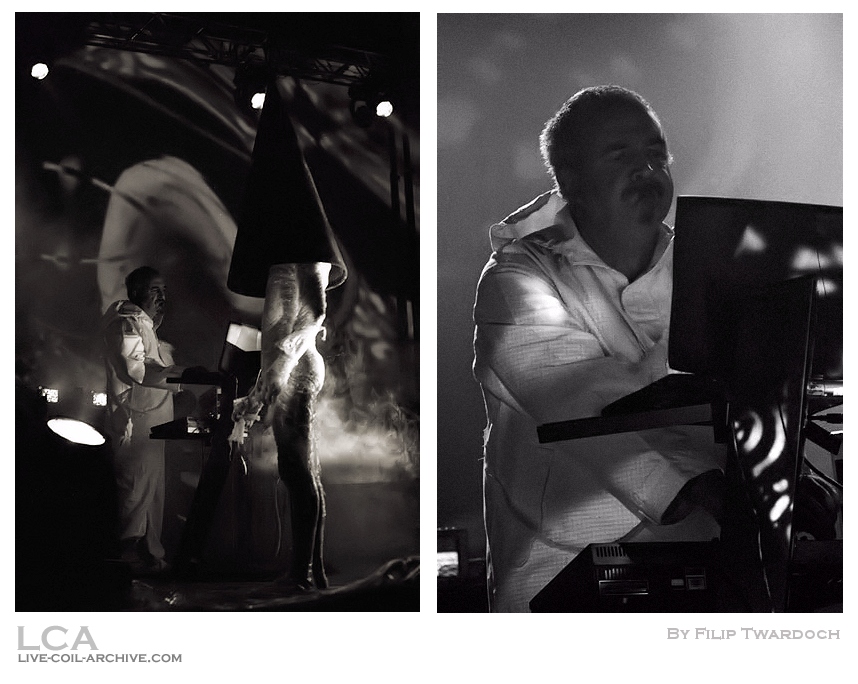 Sergei Ivanov from the previous Russian gigs regrouped with Coil here. There exist pictures taken backstage where Sergei gave Sleazy DVDrs containing AMT #1 and Andy Reynolds the DAT to SBD #1 of the 2002-09-29 Konigsberg show. He also gave them psilocybin mushrooms, which they took for the next gig in Lodz.

According to Massimo, “Only in Gedansk we had to wrap ourselves in cling film and behave. The people running the church made us very clear, they’d cut off the power if we would have done anything against the Catholic’s moral. During rehearsals, we’ve been approached by a local Coil fan who confirmed they did that before to other acts, so we took them for granted and did nothing that could jeopardize the show.” As such, “An Unearthly Red” was not played and Massimo and Pierce did nothing obscene onstage (though pictures suggest they still kissed during “Bang Bang”). However, a photo shoot backstage reveals that after the show, while still covered in fake blood, they removed plastic from their genitals and posed suggestively, kissing each other, touching cocks, and biting into candles, perhaps as a protest to the limitations placed upon them.

John appears to be sober and solemn at this show, but according to one attendee recollection detailed below, it’s possible 3City gave him some marijuana to keep him from drinking.

Massimo and Pierce’s choreography deviated from the norm. During “Amethyst Deceivers,” they spun in circles with the costume heads still on and were fully uncovered during the intro to “A Warning from the Sun.”

Peter had some technical problems with the video projections, struggling to keep the footage playing throughout the first couple of songs. Alternately, the video would be paused or the projector would display the message “No input is detected on video.” It’s unclear whether this latter message played as a default on the projector or on the DVD player.

SBD #1 incorporates either audio tracks from the multitrack soundboard recording not heard on live sources or overdubs, as this source has some exclusive instrumentation and very manipulated vocals.

Peter restarted the backing audio tracks midway through the song, making this the longest performances of the song, clocking in around 7 minutes. Perhaps this was done in an effort to fill up stage time lost when “An Unearthly Red” was removed from the setlist. Consequently, the backing video projection finishes about five minutes in.

Yow!
Ow!
Watch out! [repeated]
And the animal survivor will survive

John screams out to the audience off mic at the end of the song and Peter can be seen adjusting one of the stage lights midway through.

…Of the Hammersmith deceivers

The performance commences with the melody synth audio track and is only one to do so. Thighpaulsandra and Ossian make unique use of alternate synth timbres they’d normally reserve for “Broccoli” and “Drip Drop” during the latter half of the song.

John (after the song): “Thank you. We feel very special to be here tonight. Thank you for coming to see us. Incidental or accidental, thank you for coming. Oh, my goodness.”
Audience member: (Polish)
John: “Huh?”

It seems John was not happy about St. John’s Church putting limitations on the band.

Excremental horses. Elementary divorces, excremental horses. That combines the divine with the excremental. I’m in a church and I didn’t want to, do not want to blaspheme, but Jesus was a carpenter, and now he’s a gardener. Ask him to cut your lawn for you. And there’s some things that I don’t want to be he didn’t want to be either. An impaled Nazarene, and now he cuts the garden green. Impaled Nazarene. That’s for my friend Russell. And there’s some times when people, like, push things onto you, like a mirror maybe reflecting lights. Or the day reflects the nights, whatever, and I really don’t want to be where I’m in the position of being. Sometimes, sometimes, only, there’s sometimes. In fact, now, today, I don’t feel so ashamed about being. In fact, I’m pleased about giving. There’s positions put upon you, and it’s cold up there, it’s cold up there, it’s cold up there.

John (after the song): “Nancy Sinatra, we love her. Written by Sonny Bono, who died; in fact, he skied into a tree, which is strange.”

John’s closing words: “Again, I’d really like to thank all of you for coming to see us. It’s been very special, actually, and that’s it for tonight. Thank you.”
Dave: “Okay, okay, hallelujah…More, more, more!”
John: “Thank you very much. Thank you, Dave.”

At the end of AUD #2, Piotr Jachi says something in Polish. 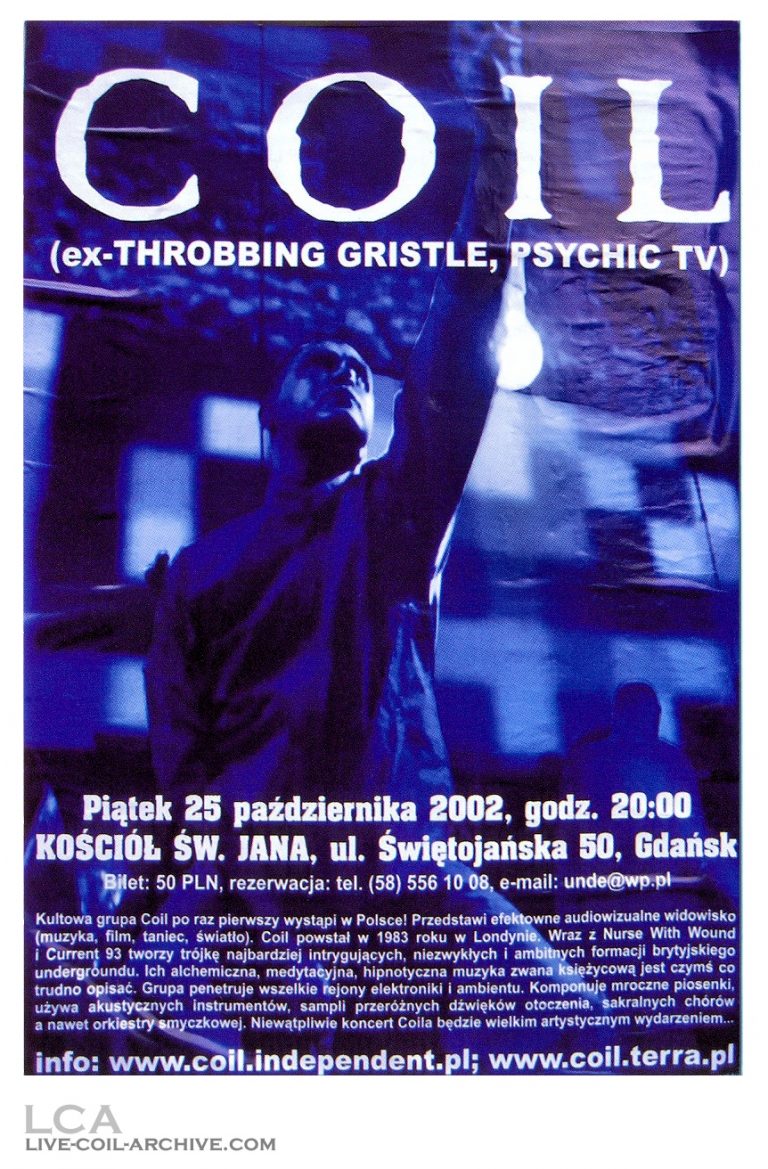 The following is a transcription of an interview with Coil translated by Google Translate from Polish to English (the original of which you can find here):

Here is the transcription and translation of the interview I had the privilege of conducting with the Coil band after their concert in St. John in Gdansk on October 25, 2002. The delay in the publication of this interview was that I had not received an answer or that the team authorized the interview. Then it turned out that the authorization of interviews in a civilized world is not an indispensable thing, but a nice addition if one wants to be polite … Anyway, better late than never.

PI: What is your impression after today’s concert?
John Balance: I thought about it as something happening in a unique place, with unique people, and I got lost in the music, which I just love! I did not pretend to be myself, just something broke. Was well.
PI: The concert versions of your songs are different from the album versions, Where do you get ideas for these changes?
JB: They just happen. We work hard and with talented people, so we can relax and give birth to this version.
PI: How did you get in touch with Massim and Black Sun Productions?
JB: With Massim? Massimo contacted us!
PI: Have you seen their show, Plastic Spider Thing?
JB: I even participated in him! It was very, very interesting. They have been living with us for three months now near Bristol. I encourage people to participate in Plastic Spider Thing because it is an incredibly powerful ritual of chaos magic. When you read about it, it may seem a bit ridiculous, but when it comes to it, it turns out to be a very, very powerful ritual.
PI: How do you get along with Genesis P-Orridge right now?
JB: Not bad. Looks like he decided to be a nice guy (laughs) and that’s good. I still have some objections to his person when I meet him remind him that he did it or that. Throbbing Gristle is just releasing a set of memoirs to commemorate their activities, as well as a couple of reissues too, so mostly Peter talks to him about legal issues. But there is no longer any hate between us.
PI: What equipment do you use in the studio?
ThighPaulSandra: We use a lot of stuff. For example, we used two Nord Modulators, one Nordlead 1 …
JB: We won the subsidy from Nord! [Laughs]
TPS: We also have Kurzweil K-2000, special delay effect, It was built by a man from England specially for us, and we also use Macintosh and a lot of different software, and even more stuff in the studio, too much to replace.
PI: ThighPaulSandra, you seem to prefer analog sounds …
TPS: Yes, of course!
(ThighPaulSandra raises Anxious magazine number and shows him the first article about Coil, then about ThighPaulSandra solo)
TPS: Look. Wonderful!
JB: No, rather awful. You should not be encouraged! (Laughs)
PI: John, you’ve worked with such artists as Current 93, Nurse With Wound, and Death in June. What was the experience of working with bands whose style is so different from Coil’s?
JB: Well, they are just friends. So in a sense they do not differ … I will do what some people ask me. You know how David Tibet asks me something that I just do it. It is not a favor, only a privilege. Also, I will always be willing to work with Steve (Stapleton – M_Alex). It was good to work with them sometime, but now I do not know Doug Pierce …

Tomasz Śliwiński attended this gig and mentioned that he recorded AUD #1, while his mate recorded AMT #1. Apparently, both the audio recorder and the video camera were stitched together somehow, as there are bumps in the audio at the same point during “I Am Angie Bowie (Sine Waves).”

Łukasz Wookie Miernik remembers: “They also asked the audience not to do any drugs because of the nature of the place (and you could smell weed all over the place as soon as the first notes reverberated). Jarboe has also performed in this church, recording and releasing the Krzykognia DVD. Upcoming Psychic TV gig was cancelled by the newly elected culture director because of using profane symbols and showing tits on stage during previous concerts. So yeah, the precautions were justified. Also, if I remember correctly, Massimo and Pierce were kissing on stage during Bang Bang, not only backstage.” When asked if Poland was more receptive to homosexuality at the time, he replied, “Not really, definitely not the church, it still isn’t. I think that was the main cause for concern, not profanity. And that’s why I’m quite sure I had a ‘wow, now they’re screwed’ moment ;)”

Michał Liberak remembers: “I was here as well. Procured some molly, gave it to Massimo and Pierce who were having the anniversary of their relationship. They probably shared it with the guys.”

Dariusz Misiuna remembers: “I remember half of 3City psychic crew was involved in finding a good weed to make John sober. (Supposedly, getting him stoned was the best way to keep him out of alcohol.)”