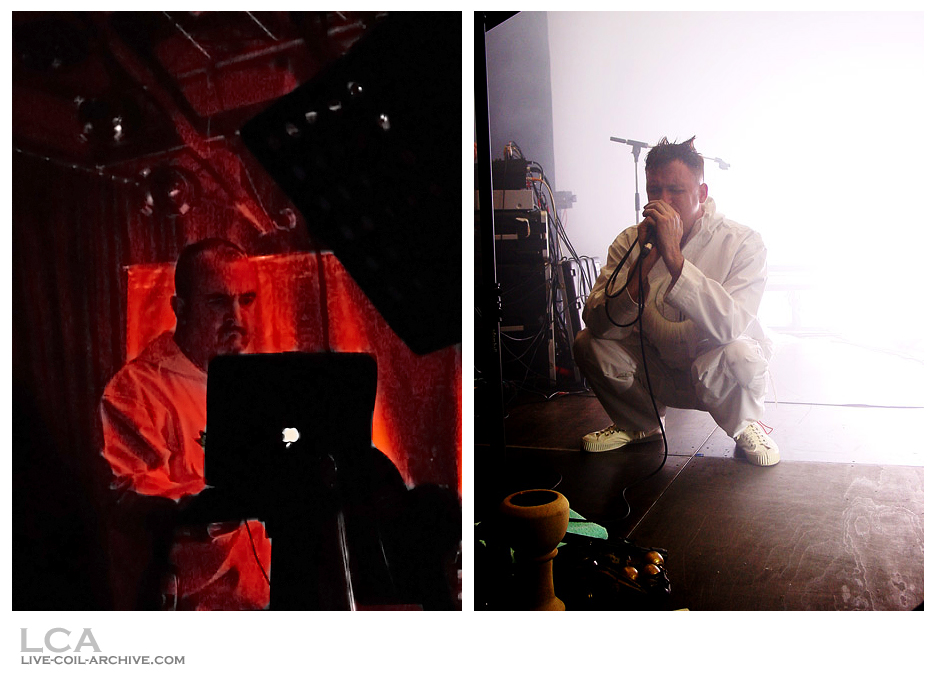 John was notably talkative at this performance. He announced the title of every song and gave some revelatory descriptions of their subject matters.

Peter throws cymbals at the metal sheet. John growls, howls, and screams into the mic towards the end of the song.

John (after the song): “That was Queer, that was ‘Queer Wolf’ for all the people, the people/animals whose eyebrows join in the middle.” Presumably, the name change came later.

John: “This is ‘Amethyst Deceivers.’ This is about, this is about the birds who control time and space.”

Peter must have messed the backing audio tracks up near the beginning of the song because they fall out of sync for a bit.

John: “This next song is ‘Slur,’ and it’s about being sodomized in the ruins outside of Marrakesh. The ruined cities of Marrakesh. It’s a time-travel thing.”

And it seems to me that when I close my eyes
All the lights in the world
Go out
And I worse [?] passes by, and you whisper to me a thousand lies
I stare in surprise
Towards the desert’s warm black
And the desert stirs
And the desert stares back
With a thousand eyes, piercing eyes, ancient eyes

John flubs “And the night passes by” and doesn’t sing “And I ask my lovers” until the final drumroll at the end of the song.

John: “’A Cold Cell.’ Not so appropriate for tonight, ’cause it’s pretty warm in here.”

From this performance onward, John would improvise a closing monologue, usually imagining himself as one of the young boys in the prison. He’d also sometimes make shivering and clicking noises, mimicking the ending vocal collage on the studio version of the song. Due to rapid recitation, it’s hard to transcribe the lyrics to most of these monologues, but here’s my best attempt at this performance:

(Shivering)
And then in the dreams…
…I remember when I was eleven…
…And the angels on the bus…
…Somebody is standing there…
And it was only dreams…
…People understand
And then the book was passed between one, two, three people
And when it came back, and there was blood all over the book
And they’re being cut in slices by the razor blades
And the razor blades have been hidden
In the back of the boys’ trousers of the boys who came in last time
And these are the boys who have been destroyed
By the last people who came to…
And it’s a really strange place to be because
You look at iron, you look at iron pools
And you see frozen water
And it’s the same thing as here
Because it’s entirely continental

It’s luxury to exist in a one place
Even if it’s in your head
And if you live in a place
Where there’s no luxury at all
And it’s a strange place where
No one who lives there wants to go there again…
It’s, it’s a cold cell
A cold cell

Paraffin is “a flammable, whitish, translucent, waxy solid consisting of a mixture of saturated hydrocarbons, obtained by distillation from petroleum or shale and used in candles, cosmetics, polishes, and sealing and waterproofing compounds.”

John: “This, uh, next song is ‘Broccoli, Broccoli.’ It’s from Musick to Play in the Dark, uh, 1 or 2; I can’t remember. It’s about ancestor worship and about taking some time every day to just remember your ancestors and sort of draw on their strength and remember that they were there so you can be here now, basically.” John pronounces “dark” like “tark,” and the song was the fourth track off of the first volume.

Wise words from the departing
Eat your greens, especially broccoli
Way before the thing (?)
To cultivate the soil
Is to generate a vegetable kingdom of our own making

What’s that sensation inside of my head?
It’s the fragrance from the flowers in the funerals of the dead

John (after the song): “Thank you, thank you all.”

John: “This next song is ‘Paranoid Inlay.’ It’s about the malice of in-in-inanimate objects.”

Such a paranoid inlay
Pain by numbers, just join the dots

Dear Diary, I must take risks
These are the things I need to give up
I must not be afraid of failure
Crystalline ladders, television
Being afraid of people I haven’t met yet
Shiny things, mirrorballs
I used to believe in mirrorballs

Audience member (after the song): “Woah! Yeah!”
John (referring to the audience member): “We’ve got a wild animal over there, yes?”
Audience member: “Is too!”
John: “Yes, indeed. Is that the end of my microphone, put there? Is it going longer? Thanks.”

John’s closing words: “Thank you. That’s it, tonight. Thank you very much for coming. We’ll be back when we can, do different things again.” 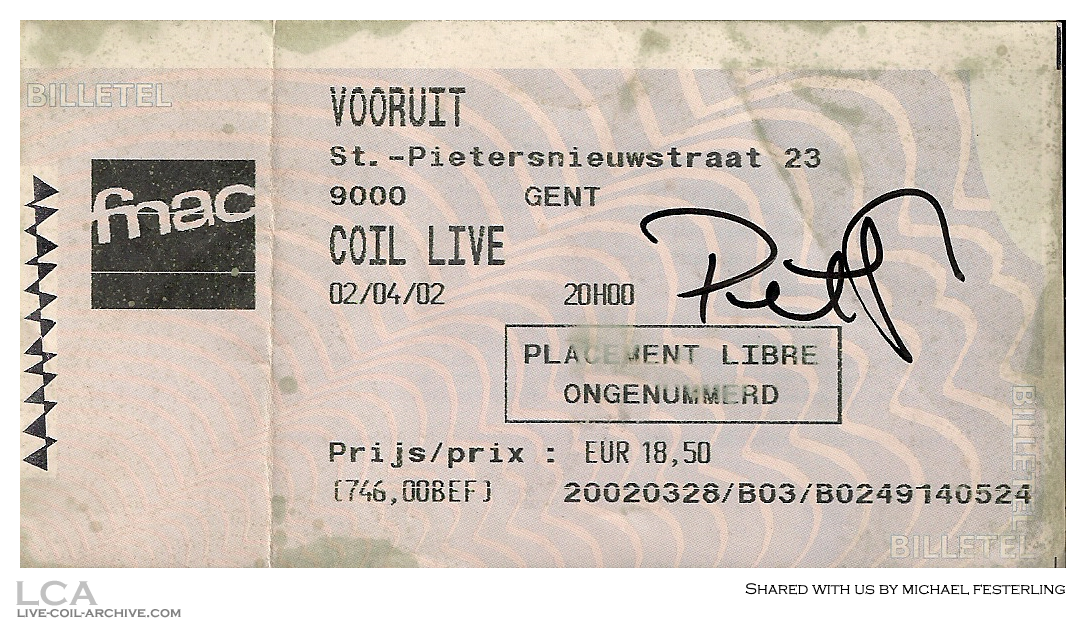 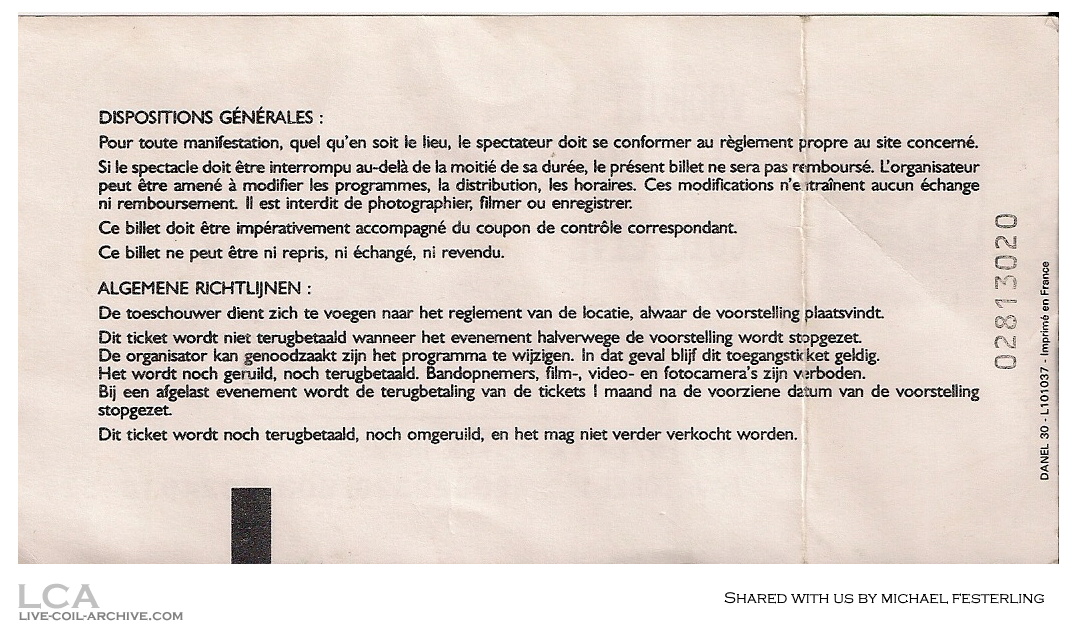