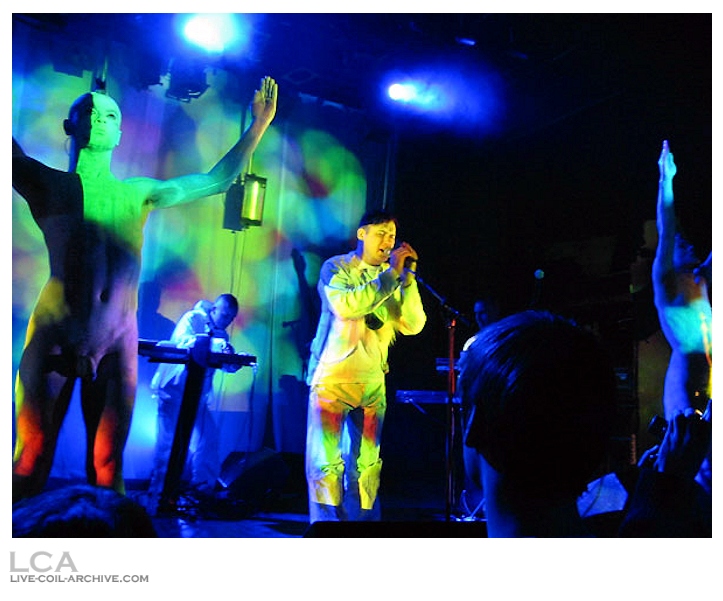 John was low energy throughout this show, singing quietly and barely speaking between songs, perhaps due to a hangover, as at the 2002-10-17 Oslo show.

There’s no applause and the song does not segway into the next.

It takes John about two minutes in to start singing.

…Burroughs is hallucinating in space

John (after the song): “A little bit of possession on that one, I think. A, an animal spirit, a lemur. A lemur. A lemur eating a hallucinogenic millipede, but not killing it. Just milking the hallucinogenic juices.” From Wikipedia: “Black lemurs [eulemur macaco] also have a habit of picking up and biting at toxic millipedes. The toxins are usually not fatal to the lemurs and they try to stimulate the millipede to release its toxins in self-defence. Once this is achieved the black lemur will rub the millipede around its body to get the toxins on its fur. It is believed that they do this to help repel insects with the millipedes poison. However other researchers have theorized that they may also do this for a source of pleasure. Because when they inhale or swallow enough of the toxins, it inhibits their monoamine oxidase system and as a result gives them a high sensation.” That particular quote lacks a citation and there’s been debate as to whether or not lemurs just do it to build up their immune systems, but it’s clear Coil believes they do.

The song commences with the percussion track.

[Backing track repeated variously]: I am not there, I am here / They are not there, they are here

John: “This is a song about Pier Palo Pasolini.”
(Audience cheers and applause)
John: “And it’s dedicated to all the poets and the queers, here.”

There’s a slight glitch in the backing audio track midway through the song.

John (after the song): “But then again, sometimes, I have to be.”

John (after the song): “That was dedicated to Courtney Love. She brings a bad reputation to the word ‘witch,’” earning him some laughs from the audience.

And the president of America wakes up in the middle of the night
With his hands dripping, dripping red, an unearthly red
And he doesn’t know if it’s dripping red or tripping red
Tripping or dripping…screaming an unearthly red
He wakes up and he thinks, ‘Oh, God told me to do it!’
Bloody footprints all over the White House carpet
Bloody footprints all over the White House carpet
What are they gonna do? How are they going to clean that up?
An unearthly red in the presidential bed
Tripping and dripping
Dripping right hand, tripping left hand
Oh, my mother is Satan

According to Peter in the liner notes to Colour Sound Oblivion, the day after this gig, “On route to Poland, via the Latvian port of Riga, at dawn, Jhonn passed out cold in the car park, waiting for the bus to pick us up, and couldn’t, or wouldn’t, be woken.” 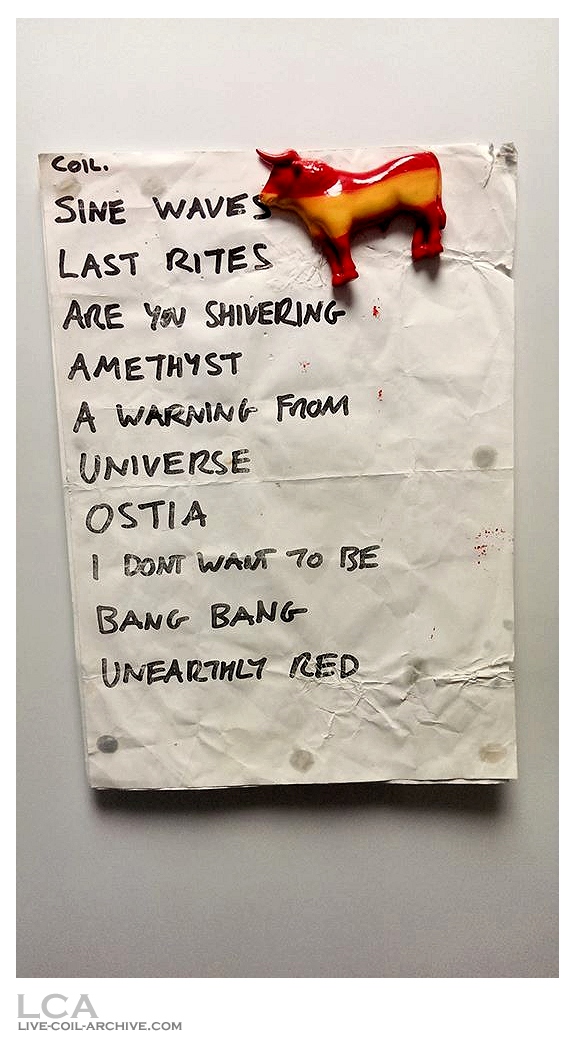 Tuukka Franck attended this gig and remembers: “Saw them in Finland 2002. Was one of my first magical experiences..”