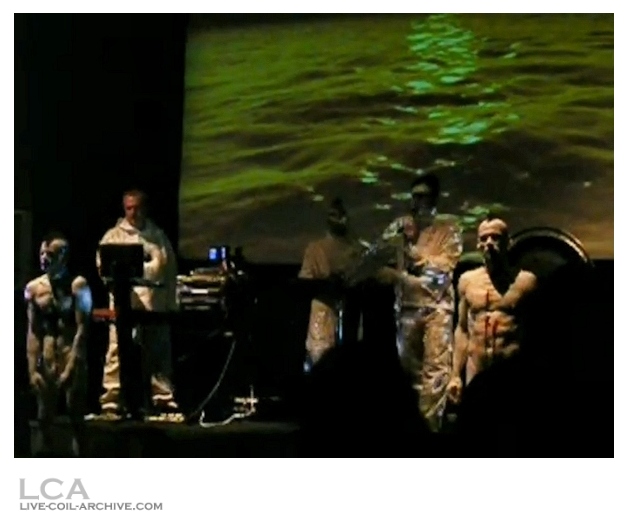 Probable Set List (Concert Has Not Surfaced In Its Entirety)

However, to be even more confusing, Ossian is seen in AMT #1 to remove the lower part of Massimo’s black costume during “Drip Drop,” a song by which point the pair have already discarded their costumes entirely. It’s possible “Drip Drop” is the 3rd song in the set, then, given that’s the usual point Thighpaulsandra and Ossian would remove that article of Massimo and Pierce’s clothing! But then, pictures reveal that Ossian walks back to Massimo, to remove the top part as well – again, something which does not normally happen. Usually the removal of the bottom and top parts of the costume are spaced out between two songs at any given point.

I guess it’s still up in the air, since Coil were known to occasionally mix up the setlists, choreography, and backing projections in unpredictable ways. For example, two pictures show they played the “Moulin Rouge” backing video behind them at one point, something which they did not normally do. Maybe they played an exclusive song? Who knows.

The day of this gig, Brainwashed announced: “Coil are currently in the middle of a European tour. In addition to the previously announced dates, there is apparently an impromptu concert taking place tonight (October 19th) in Stockholm, Sweden. This tour was originally planned to end with two shows in Italy on November 1th & 2th, but it appears that the final stop will now be in Vienna on October 29th. However, it is rumoured that Coil will be joining Black Sun Productions on stage at their November 4th performance of the Plastic Spider Thing ritual at Teatro I’ in Milano.”

This was apparently a surprise gig, which may explain the lack of a full surfaced recording. 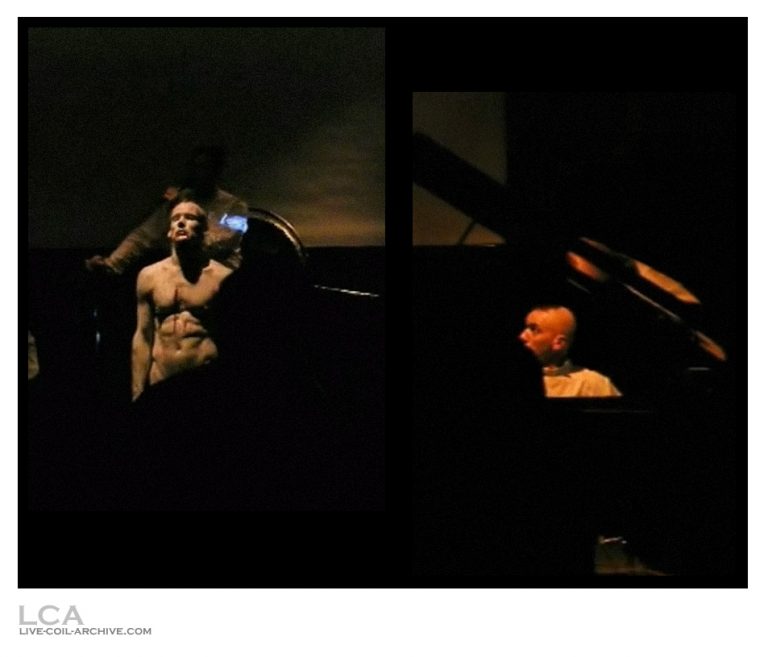 Peter Åkerbäck attended this gig and remembers: “Copenhagen and Stockholm. Its all a haze, but I do remember shaking hands with Peter and John after the Fylkingen gig (its a very small venue and after a concert its always very intimate) and Peter said ‘This was so much better then in Denmark’ 🙂 John was very happy and had gotten a whole back of beer that ha carried around 🙂 By the way, the whole Fylkingen gig was recorded by a very good camera. This is standard on Fylkingen every time, I hope someday they find it XD…And yes this is the actual baby rattle used by Jhonn at Fylkingen…He sort of drop it in front of the stage and I grabbed it. It may have been Fylkingen property by I do not really care, its mine now” On October 18, 2020, Peter shared a picture of the baby rattle on Facebook: